A court ruling in Texas has set the stage for ExxonMobil’s legal challenge to a climate change investigation by the U. S. Virgin Islands to proceed in federal court.

Exxon and the Virgin Islands’ Attorney General Claude Walker had been bickering for more than a month over whether the company’s lawsuit to quash a subpoena issued by Walker should be heard in Texas state court or in federal court. The subpoena demands Exxon turn over a broad swath of records as part of an investigation into whether the oil company conspired to cover up its understanding of climate science.
Without elaboration, U.S. District Judge Ed Kinkeade rejected Exxon’s arguments that the case should be tried in a state court where it was originally filed in April.
“After careful consideration of the Motion, the response, the reply, the applicable law, and the relevant portions of the record, the Court DENIES the Motion,” according to Kinkeade’s two-sentence order.
The ruling, unless appealed by Exxon, means the case will begin winding its way through the Fort Worth division of the federal court for the Northern District of Texas. Walker and the attorneys hired by the Virgin Islands to handle the investigation now have until July 12 to respond to Exxon’s original lawsuit seeking to block the subpoena.
Exxon spokesman Alan Jeffers did not respond to a request to comment.
But in one of its legal filings, the company said: “ExxonMobil seeks only a full and fair hearing of its claims before a court with jurisdiction to consider the requested relief. If this Court determines that ExxonMobil’s suit is ripe for federal adjudication, ExxonMobil is prepared to proceed.”
Exxon began a vigorous fight to block the subpoena soon after it was issued in March, after Walker joined a coalition of 17 attorneys general vowing to probe the fossil fuel industry over climate change and demanded Exxon’s records.
Exxon filed its suit in a district court in Tarrant County, Texas, saying the subpoena was invalid because it sought records beyond the five-year statute of limitations, and violated the company’s constitutional rights to free speech and undue searches.  Walker then had the case sent to federal court, arguing that is the most appropriate venue to litigate the constitutional questions raised by Exxon.
Exxon maintained that state courts could handle constitutional questions, but the Virgin Islands said Exxon was simply trying to find a “friendlier forum.”
“In theory, state courts could hear federal constitutional questions,” said Thomas O. McGarity, a University of Texas at Austin law professor. “But there is no forum more suitable than federal courts because of their institutional competency in deciding federal constitutional questions.” 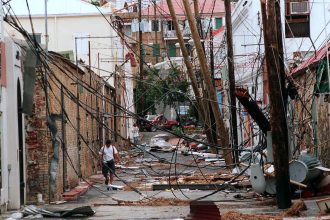 For Virgin Islands, Being on the Frontlines of Climate Impacts Is Grounds for a Lawsuit