The auditing arm of Congress says the costs of climate change are likely to soar in the decades ahead, and it is urging the federal government to get a better grip on the risks to the economy and to the federal budget.

The Government Accountability Office, in a report issued on Tuesday, cited a range of research concluding that the costs of worsening droughts, floods, wildfires, heat waves and storms will run into hundreds of billions of dollars and threaten many parts of the economy, while hitting some regions particularly hard.

But so far, it said, too little is being done to understand and defend against the dangers.

“Even with the magnitude of these disaster recovery costs, the federal government does not have government-wide strategic planning efforts in place to help set clear priorities for managing significant climate risks before they become federal fiscal exposures,” the report says.

Already, the report noted, direct costs to the federal government for expenses like firefighting, flood insurance and payments for lost crops have come to about $350 billion in the past decade. (The figures don’t include tens of billions yet to be paid for the latest season of storms and fires; and the costs inflicted across the whole economy are much bigger than those reflected in the federal budget.)

Reviewing recent estimates, the GAO predicted that annual fiscal costs could increase by as much as $35 billion a year by 2050, and by as much as $112 billion by the end of the century.

Because all such cost estimates are imprecise, one of the most important things the government can do is to improve them to better identify particular risks and figure out how to minimize the costs.

Instead, the Trump administration has been under stiff criticism for taking steps to scale back estimates of climate change costs, especially in its justification for revoking the Clean Power Plan, a centerpiece of the Obama administration’s climate policy, which cracked down on greenhouse gas emissions from power plants.

The GAO did not address that particular rule, but it criticized the Trump administration for neglecting efforts to address the issue.

How Progress Has Been Undermined

For years, the GAO and others had warned that the federal government had been blind to the rising fiscal risks, but recently the agency had seen glimmers of progress. Now, those have been undermined by Trump policy changes.

“In February 2017, we found that federal agencies had undertaken various strategic planning efforts, but it was unclear how they related to each other or whether they amounted to a government-wide approach for reducing federal fiscal exposures,” the report said. “Subsequently, a March 2017 Executive Order rescinded some of these planning efforts and created uncertainty about whether other planning efforts would continue or take their place.”

The GAO cited research into the economy-wide effects of climate change—beyond those incurred directly by the federal government—that says, if emissions stay on their current course, rising temperatures could mean up to $150 billion in lost labor productivity due to missed work hours, up to $89 billion in coastal damage and up to $87 billion in increased energy costs, annually. Agricultural losses could reach $53 billion a year, even though some crop yields could climb.

The report, requested by Sens. Maria Cantwell (D-Wash.) and Susan Collins (R-Maine), took two years and comes as Congress considers a relief package for Puerto Rico that would also pay flood insurance claims from the recent sweep of deadly hurricanes.

The report leaned on two major nationwide studies on the economic impact of climate change, along with 28 others, including assessments from the U.S. Global Change Research Program.

It finds that the economic impacts will vary across the country, but “the Southeast, Midwest and Great Plains regions will likely experience greater combined economic effects than other regions, largely because of coastal property damage in the Southeast and changes in crop yields in the Midwest and Great Plains.” The West, the report says, will suffer from increased drought, heat and wildfire.

In some northern areas, certain crop yields will go up as temperatures rise and cold-related deaths will drop.

The report recommends that Trump and executive offices, including the Council on Environmental Quality (CEQ), Office of Management and Budget (OMB) and Office of Science and Technology Policy (OSTP), “use information on the potential economic effects of climate change to help identify significant climate risks facing the federal government and craft appropriate federal responses. Such responses could include establishing a strategy to identify, prioritize and guide federal investments to enhance resilience against future disasters.”

The administration did not respond to the GAO report’s draft recommendations, as is customary. 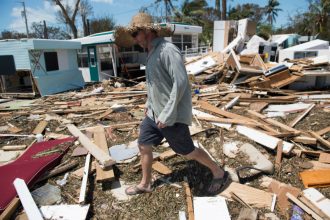