The last time the Earth was as warm as it is now, sea level had risen so high it would have swamped many of today’s cities.

That was about 125,000 years ago, and evidence shows that the warming leading up to that point had taken millennia. What’s happening today, as heat-trapping greenhouse gases build up quickly in the atmosphere, is pushing the climate system at a far faster pace, leaving scientists scrambling to answer some existential questions.

How much more will sea levels rise? How fast? Where will the impacts be the greatest, and how will we adapt?

They were chosen partly because answering those questions is so important to humanity.

“The inclusion in this year’s Fellows of three scientists and one artist who works on climate change expresses the urgency felt by the scientific community and the deep engagement of creative minds in mitigation and adaptation,” said Cecilia Conrad, a managing director at the John D. and Catherine T. MacArthur Foundation who oversees the Fellows Program.

Dutton’s research shows that the Greenland and Antarctic ice sheets may melt much faster than scientists thought just a few decades ago. Mitrovica’s models help explain how sea level rise will vary regionally by identifying the “fingerprints” of various ice sheets. And Jupiter works on sustainable development and ecosystem management on islands in the Western Pacific.

“As one person, there is only so much I can do. But now I have this platform, and I can help lift others,” said Dutton, a geochemist and sea level researcher who recently joined the University of Wisconsin-Madison from the University of Florida. She said she plans to use the $625,000 award to support other female scientists. The money, which each of the 26 MacArthur Fellows announced on Sept. 25 receives, has no strings attached.

Up until a few decades ago, scientists thought the polar ice sheets were so big and so cold that they would melt very slowly. Dutton’s research using fossilized corals around the world has helped to show that Greenland and Antarctica are highly sensitive to warming.

When planetary warmth peaked between ice ages some 125,000 years ago, sea level had risen so much that corals grew in places that are high and dry today.

In the Seychelles, Dutton studied fossilized corals in an outcropping about two dozen feet above sea level. The results of her analysis were eye-opening. They suggested that sea level must have been 20 to 30 feet higher when temperatures on Earth were slightly warmer than today. That would mean a significant portion of the increase would have come from more than thermal expansion, mountain glaciers and melting on the Greenland Ice Sheet: it would have come from Antarctica.

“When we got that result, I said if this is right, that’s a big difference, and it probably means the Antarctic ice sheet is melting,” she said. “I sat down on the beach and thought about it, knowing that people are not going to like this.”

“The thing we’re really focusing on right now is figuring out the rate of sea level rise,” she said. “What people really want to know is how quickly this is going to happen. Is it going to take centuries or millennia? Will it be gradual? Or will it happen in sudden jumps, since we know ice sheets can decay in a non-linear fashion.”

The new IPCC special report on oceans and cryosphere published this week cites Dutton’s research and highlights those concerns, especially with acceleration of ice sheet melting.

“Mass loss from the Antarctic ice sheets in the last 10 years tripled over the previous decade and doubled from the Greenland ice sheet. Global mean sea level is rising at 2.5 times the rate of the 20th century,” Dutton said. “We are observing this acceleration. How much have we committed ourselves to? The largest uncertainty is how the Antarctic ice sheet is going to respond.”

Combining Dutton’s coral findings with other analytical tools may help answer the critical questions of how ice sheets respond to warming and how fast sea level will rise, said Mitrovica, a Harvard University geophysicist and sea level modeler.

“She (Dutton) and I look to these ancient events for two pieces of information: How much melting was there during these warm periods, and did the ice sheets collapse 500 years, or several thousand years, into the warm period? How stable or unstable are the ice sheets?” Mitrovica said.

While Dutton tries to pinpoint sea level at certain times during the Earth’s history, Mitrovica combines that information with other data from satellites, tide gages and other instruments to paint a global picture of how sea level rise changes across time and space.

What were once thought to be “enigmatic” regional variations of sea level rise are now understood as a global pattern that shows the source of the increase, he said.

“My work shows sea level was not the same everywhere at that time, and here’s how you can connect the dots between those areas. If successful, you can say not only that average sea level is increasing. You can say something more, that the water seems to have been coming from Antarctica or Greenland.”

If you know that, and you have an idea of how fast those ice sheets will melt, then you have useful information for coastal communities trying to prepare for the slow-motion flood, he said.

“We need to understand how much adaptation we will need, and that’s a complicated question,” he said.

“Both scientists’ work (Dutton’s and Mitrovica’s) has indicated that sea level rise from human-caused warming may be an even greater threat than scientists thought only a decade ago,” Mann said.

Fixing global warming and slowing sea level rise is not going to solve all the world’s environmental challenges, said  Jupiter, a marine scientist with the Wildlife Conservation Society who earned her MacArthur Fellowship for her work helping Pacific island communities respond to disruption caused by climate change and other human impacts.

Millions of people will be displaced by the end of the century, not just by sea level rise, but also by connected impacts to the natural world, including land degradation and over-use of resources.

Along with figuring out the logistics of climate displacement, communities need to also learn how to deal with the stress and trauma that causes, and how that affects mental and spiritual health—the well-being of people, she said.

“In the Pacific, people don’t separate themselves from the environment, so this is a natural place to be working with local people to be undertaking interventions in management that improve public health, environmental health as part of overall system health and climate is inescapable,” she said.

People have deep-rooted cultural attachments to place, and dislocation can result in mental anguish and grief, and that’s not calculated into equations about climate relocations. These are components of human well-being that are overlooked in international development, she said.

“Twenty years ago, there was still a lot of doubt about impacts from human activities like agriculture, land clearing and livestock. Now people are aware of these impacts and there is a consensus, much like there is consensus around climate impacts.

“What we’re stumbling on is the importance of looking after your place for the continuance of cultural practices and for well-being, what indigenous people have been doing for thousands of years,” she said. “Looking after ecosystems is part of many indigenous cultures, and they understand how that’s important for mental and spiritual health.” 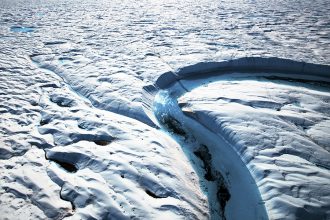 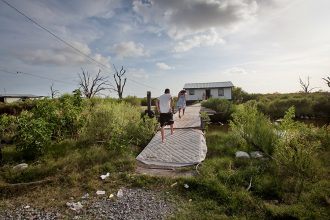