The Conservation Law Foundation has filed a federal lawsuit against ExxonMobil, claiming the company has ignored the dangers of climate change and consequently endangered communities along the Mystic River in Massachusetts.

The threat stems from an oil transfer and storage plant operated by Exxon in Everett, Mass. that is vulnerable to vicious storms, sea level rise and storm surge, according to the 70-page lawsuit filed Thursday in United States District Court for the District of Massachusetts.

“Despite the extensive research conducted by ExxonMobil scientists and knowledge of the conclusive findings regarding climate change and its impacts, including sea level rise, ExxonMobil has not taken reasonable and required measures to protect the Everett Terminal against such risks,” according to the lawsuit.

The lawsuit proposes a unique legal concept that the company is obligated to address climate risks in the face of environmental disaster.

Exxon did not respond to a request to comment.

The filing of the lawsuit occurred four months after CLF submitted a formal letter of intent to sue Exxon. The lawsuit adds another layer to the scrutiny Exxon has come under in the past year, sparked by investigative reports by InsideClimate News and others, that include investigations by two state attorneys general and the Securities and Exchange Commission.

The foundation represents 4,000 members and includes 1,600 members in Massachusetts. The lawsuit says they are worried that discharges from the Exxon facility contain toxic pollutants that are known to be harmful to humans and aquatic life and are persistent in the environment.

The foundation alleges in the lawsuit that the Everett terminal has violated 14 provisions of the Clean Water Act and the Resource Conservation and Recovery Act, health and safety laws designed to protect water sources.

Storm surge at the Everett Terminal will flush hazardous chemicals, including benzene, toluene, and ethylbenzene, into the Mystic River and through the waterfronts of several communities along the river’s banks, according to the lawsuit. The Mystic River flows seven miles from Lower Mystic Lake through a bay called Island End River and the communities of Arlington, Somerville, Medford, Everett, Chelsea, Charlestown and East Boston before emptying into Boston Harbor.

“ExxonMobil’s Everett Terminal is at risk of being inundated and destroyed by storm surge and sea level rise, because the facility has not been properly engineered, managed, and fortified or, if necessary, relocated to protect from the impending threat of these climate change-related impacts,” according to the lawsuit.

The foundation contends Exxon has failed to operate its pollutant treatment system in a manner that complies with its National Pollutant Discharge Elimination System (NPDES) permits that address water pollution.

“CLF and its members are concerned that these toxic pollutant discharges, which frequently exceed the limits in ExxonMobil’s NPDES permit, harm the ecosystems and human use and enjoyment of the Island End and Mystic Rivers,” the lawsuit says.

The facility is so vulnerable that even average rainstorms cause wastewater impoundments at the site to spill pollution to spill into the river, according to the lawsuit. And the effects of climate change will only exacerbate the problem, it said.

The lawsuit cites documents obtained by ICN for its investigative series, including an October 31, 1977 ExxonMobil interoffice memorandum. In it, Exxon acknowledged the rule of thumb that doubling the current level of CO2 from 330 ppm to about 700 ppm would cause a change of about 2ºC on average in temperature, and that the “CO2 problem…is the most important man-made weather problem that we have to contend with.”

The foundation is seeking an order directing Exxon to perform and pay for any work that may be required to mitigate dangers posed by hazardous waste and solid waste at the Everett Terminal, and restraining Exxon from further violating federal pollution statutes. It also is asking that civil fines of as much as $51,570 a day for Clean Water Act violations be imposed back to 2009. 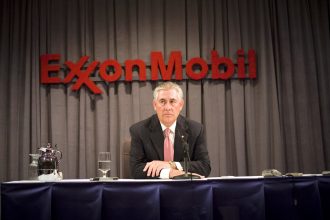